Pattern Designing In Embroidery And Tapestry Weaving For Beginners

Pattern Designing In Embroidery And Tapestry Weaving For Beginners 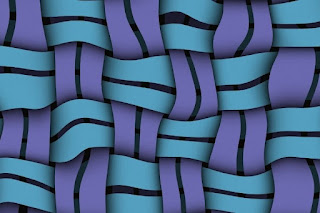 A beginner sometimes experiences difficulty in preparing her own patterns. A designer needs a wide knowledge of many subjects, which necessitates much time being given to study; also drawing ability is necessary to enable the worker to set down her ideas upon paper.

For much simple and pretty work, however, a slight acquaintance with drawing and design is sufficient, and any one who can master the requisite stitches can also acquire some knowledge of these two subjects.

The word design frightens some who do not know quite what it means or entails. Perhaps they do not realize that the design has already been begun when the object to be worked has been settled, and the material, thread, and stitches have been decided upon—the rest comes in much the same way, partly by a system of choice; as it is necessary to know what materials there are which can be used, so must the chief varieties of pattern be known from which choice can be made.

All patterns are built up on some fundamental plan, of which the number is comparatively small. The ability to choose, plan, and arrange is in a greater or less degree inherent in every one, so there should be, after all, no great difficulty in the design. The necessary underlying qualities are—a nice taste, freedom from affectation, an eye for color and form, and, it might be added, a fair share of common sense.

A pattern maker requires some stock-in-trade, and it is wise to collect together a store of some well-classified design material of ascertained value, ready to be drawn upon when required. A good knowledge of plants and flowers is very necessary. This is best acquired by making careful drawings from nature.

In choosing flowers for embroidery purposes, the best-known ones, such as the daisy, rose, or carnation, give more pleasure to the observer than rare unrecognizable varieties. Figures, birds, beasts, and such things as inscriptions, monograms, shields of arms and emblems, all demand study and drawing, both from miscellaneous examples and from embroideries.

The treatment of all these should be studied in old work, in order that the curious conventions and all kinds of amusing and interesting ideas that have gradually grown up in the past may still be made use of and added to, instead of being cast aside in a wild endeavor after something original. The student who collects a supply of the foregoing materials will find she has considerably widened her knowledge during the process, and is better prepared to make designs.

In making a pattern the first thing to be decided upon is some main idea, the detail that is to carry it out must then be considered. This latter may be of various types, such as flowers, foliage, figures, animals, geometrical forms, interlacing strap work, qua-trefoils, &c., &c.; perhaps several of these motifs may be combined together in the same design.