Star Anise is a dark brown and rust-colored seed pod measuring 1–3 cm in size.
The pods have a unique star shape, with 6–8 pronged arms stretching outward from a central axis, tapering to a point at each end. 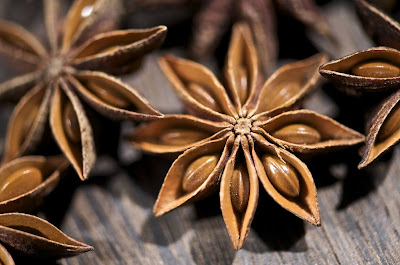 The prongs are often split slightly open, with each arm containing one pea-sized seed.
The star-shaped pods have an intense, licorice-like aroma with a distinct and robust warm, sweet, and spicy flavor with prevalent notes of anise, mint, and clove.
Source: Herbs Encyclopedia
Illicium verum is a medium-sized evergreen tree native to northeast Vietnam and southwest China.
A spice commonly called star anise, staranise, star anise seed, star aniseed, Chinese star anise, or badian that closely resembles anise in flavor is obtained from the star-shaped pericarps of the fruit of I. verum which are harvested just before ripening.
Star anise oil is a highly fragrant oil used in cooking, perfumery, soaps, toothpastes, mouthwashes, and skin creams.

The fruit is a capsule-like follicetum, star-shaped, reddish- brown, consisting of six to eight follicles arranged in a whorl.[5]

Each follicle is boat-shaped, 1–2 cm long, rough and rigid, color reddish-brown, with 1 seed, opening along the ventral edge when ripe.[5] carpels size of 10 mm long, boat-shaped; they are hard and wrinkled, containing one seed.

Differences with similar taxa: Illicium anisatum had smaller fruits that does not form a regular star due to the abortion of some carpels.

Also fruit follicles are not swollen in the middle and had a more pointed apex.

Also usually had more than 8 follicles and the fruit has weaker odour. The seeds in Illicium anisatum are flat or almost spherical.[5][6]